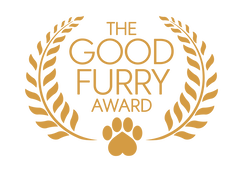 THE WINNERS ARE:​2022 Winners and Nominees!

The LIFETIME ACHIEVEMENT AWARD GOES TO:
​​CONGRATULATIONS!
Check out our official theme song by Pepper Coyote! 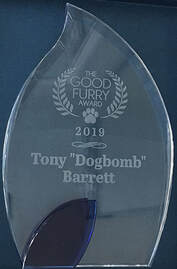 Winners Get a Handsome Trophy and $500 Cash!
What is The Good Furry Award?

The Good Furry Award is an annual award that debuted in 2019. Each year, the award will be presented to one furry (or group of furries) to recognize them for outstanding spirit in the furry community. The winner will receive a check for $500 and a crystal trophy of recognition. The award money can be used at the winner's discretion, although we would not be surprised if it is used to attend a convention or buy something furry.

Who is eligible for the award?

(Note: Please do not nominate people who are deceased or are no longer active in the fandom.)

What do you mean by "group of furries"?

A group is defined as any cohesive organization of two or more furries. For example, this can be a musical group, a fursuit performance/mascotting group, the ops staff at a furry convention, a team of people who organize regular furmeets, a podcast station, or even the staff of a furry publishing company or other business. The award would go to the entire team, company, or organization.

Will there be two awards then? One for an individual and one for a group?

Sadly, no. I don't have the money for two awards. However, the top 3 runners-up will all get honorable mentions and will be eligible for the next year to win.

Are you sure there are no restrictions?

There is one restriction. Papabear Grubbs Grizzly (mundane name: Kevin Hile), who runs this award, is not eligible for the award and cannot nominate anyone. Also, anyone who actively works on administering this award is ineligible. People who have won first place in previous years are also not eligible to win a second time.

What qualifies someone to win this award?

The Good Furry Award is about community spirit. This is not an award for who is the best fursuiter or artist or writer. It is not about being the most popular or being the furry who is seen on news broadcasts.  It is about furries who do good works to promote and sustain the fandom and who represent the best in furry. Examples might be a person who does extraordinary work as a furcon volunteer, or who runs a charity, or who has done a lot to help furries in need, or who does something to promote a positive image of furries to the mundane world. I'm sure you understand the phrase "community spirit," so nominate people based on that concept.

The same goes for groups of people, organizations, and even businesses that help out furries.

What is the selection process?

Furries can nominate people and groups that they feel epitomize the furry spirit of acceptance, charity, and helpfulness.

You may nominate as many people as you wish. Nominations for this year's competition will close at the end of April 2022. After that time, several of the best submissions will be selected by Papabear Grubbs and posted on this website. The nominees and their stories will be posted on this website and the general furry community can vote for their favorite nominees. The person with the most votes wins. If there is a tie, the top vote-getters will have a run-off.

Isn't this just another way of stroking the egos of popufurs?

The Good Furry Award is meant for furries who do good works. Just being popular because you have a nice fursuit, or whatever, will not get you into the roll of nominees.

What is the deadline for nominating someone?

The voting is now closed for 2022. Come back next year for the 5th annual awards.

Who won the Good Furry Award in the past?
​
Where is the money coming from for this award?

The money is being donated by me, Kevin Hile (Papabear Grubbs Grizzly), and is also sponsored by Uncle Bear Publishing.

Why are you doing this?

It seems to me that every time something negative happens in the fandom, people focus on that too much to the point of giving the entire fandom a bad reputation. Rather than paying attention to the few furries who cause trouble, I would like us all to focus on furries who do good things and are good people. Let's give those furries some attention instead! The vast majority of furries are good people, and I want us all to start talking about them and thinking about them. My hope is to uplift this community. It's not so much about the final award (although that is important); it is about taking serious time to bring good furries to light.

If my nominee doesn't win the award, can he or she be considered for the next year's award?

Yes, you can re-nominate someone the next year if they don't win or if they win an honorable mention. You can win multiple honorable mentions, but those who have won the top award once cannot win a second time.
​
Is there a second or third prize?

There will be three honorable mentions for the top vote-getters after the winner.

Can I nominate myself?

Um, no. (And message to trolls: I know you're out there, and that is why I check all nominations to make sure they are legitimate. Leave your trolling urges at the door.)

What do I do now?

Nothing left to do this year come back when nominations are open for the 5th Annual Awards!